Bhaskar’s Arts Academy is a Singapore-based Indian classical dance, music and theatre company. The Academy steadfastly believes in contributing to the vibrant arts scene in Singapore, and performs three to four seasons annually. While committed to the sophistication of traditional techniques and philosophy, the Academy also gives credence to the innovative spirit of cross-cultural explorations. It is constantly pushing the boundaries of traditional Indian dance in local and international performances through a uniquely evolving style reflective of the Bhaskar's legacy as well as the multicultural Singaporean identity.

Some notable works include the Chinese folk tale Butterfly Lovers (1958 & 2021) and the Thai mythological story Manohra (1996 & 2018). Local poems in different languages were set to Indian dance in Rasa & Dhwani (2003). More recently, the Academy is talked about for People Get Connected (2006 & 2021), which depicted human communication through the ages; CHAKRA (2012), the first traditional Indian dance production to incorporate sand art; XPressions (2013), where music and dance shared centrestage; and the Marabu trilogy (2019, 2021 & 2022) which traced the passage and legacy of the Indian community in the Southeast Asian region.

The Academy has also plays a pivotal role in promoting the ancient art form of Kathakali in Singapore. Formed in 2002, the Academy’s Kathakali Troupe produces innovative, cross-cultural works to expand the traditional repertoire and appeal to new audiences in a cosmopolitan age. In this vein, the troupe has staged Cherita Singapura (2003) and Lady Spiders (2006) with Malay and Mandarin lyrics respectively. A Kathakali twist was also given to the Shakespearean tragedy King Lear (2009). The troupe continues to produce traditional works in Malayalam as well as explorative works both locally and internationally. 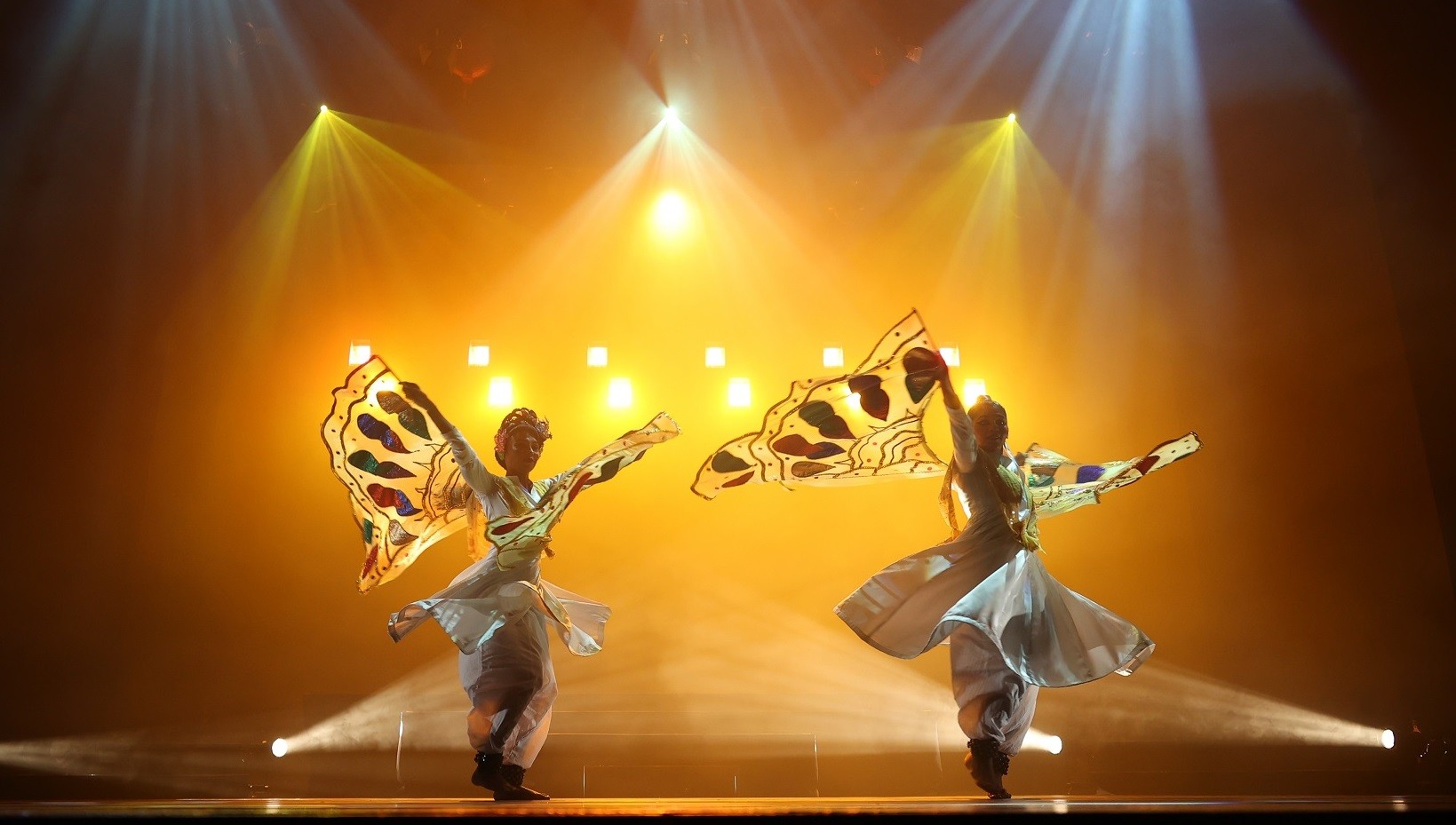 To create, produce, present and promote Indian (South Asian) dance, music and theatre performances
• that are ingrained in our uniquely evolving style of art-making and reflective of the Singapore spirit and its multiculturalism
• while being rooted in traditional techniques and philosophy
• to domestic and international audiences Established in 1952, when the late Mr KP Bhaskar first stepped foot in Singapore, the Academy remains one of the longest standing providers of classical Indian performing arts in Singapore. Take a look at our timeline to get a glimpse of our vibrant past!

With the COVID-19 pandemic at it's peak, many of BAA's performances are cancelled or postponed. However, BAA quickly pivoted to the online platform and successfully presented Dasha TanMatra (10 Subtle Elements), featuring 10 different digital projects comprising dance and music programmes, a webinar, projects celebrating the healthcare workers and the migrant community and many more. BAA went on to be commissioned for other digital works such as Prati Sandhi and Life In A Cloud Digital Playbook. Many of BAA's Arts in Education programmes move to the digital arena.

The curtains opened again with Pulary - An Auspicious Dawn which was a pilot programme with live audiences.

People of Ninh Binh Province, Vietnam are treated to bharatanatyam, kathak and kathakali dance forms through BAA’s participation in the 1050th Anniversary of Dai Co Viet State celebrations. BAA’s bharatanatyam and kathak dancers are featured again at the ASEAN Festival of Arts in Yogyakarta, Indonesia.

The next generation of younger artistes is trained by Kalamandalam Biju and introduced in the Therukkoothu performance Vellai Vattam. Neewin Hershall’s Singapore premiere of Facade enjoys a two-day full-house show at Goodman Arts Centre Black Box. Brihannala – Arjuna’s Disguise, the second (of a trilogy) collaborative work with an ASEAN partner is staged successfully with friends from Amrita Performing Arts of Cambodia, and is graced by His Excellency Ambassador Ngoun Sokveng.

Ramayana: Ashoka Vanam goes to Bangkok, Thailand as part of the ASEAN Plus Ramayana Festival.

President Tony Tan awards Santha Bhaskar the Bintang Bakti Masyarakat (Public Service Star) in recognition of her decades of contributing to the cultural landscape of Singapore.

BAA’s Orchestra is brought to the next level with the staging of Raga Sandhya, the inaugural music production featuring Swathi (BAA’s youth orchestra). It is also the year BAA is awarded double honours with the Singapore International Festival of Arts commissioning Returning under the artistic direction of Madam Goh Lay Kuan, as well as Smriti Padha, a collaboration with Kerala Kalamandalam under the artistic direction of Santha Bhaskar. BAA also showcased the talents of young choreographers Dhana Bharathi, Usha Anbalagan, Shangari Sadheesh and Hemalatha Sathasivam with their “Tales from the Panchatantra” in Puraskara.

Ramayana goes on tour to New Delhi, Patna and Kolkatta as part of the Ramayana Mela in India.

BAA’s Kathakali Troupe gets the honour to present Kiratham together with maestro Kalanilayam Kochu Narayana Pillai. Performed by six 3rd generation dancers, Bhairavi marks the coming-of-age of choreographer Ambujah Thiru, who is a student of Santha Bhaskar.  Through choreographer Meenakshy Bhaskar’s Yaatra IV, BAA forays into creating awareness of social issues such as the plight of domestic violence victims through dance.

With the heaviest heart, students, teachers, staff, parents and well-wishers of BAA and NAS bid farewell to our Founder and CEO Mr KP Bhaskar on April 17, 2013. In his passing, Singapore loses a pioneering force and visionary in the field of arts.

XPressions is presented to music composition of renowned flautist and international musician BV Balasai. In collaboration with inDANCE (Canada), the Academy presents I, Cyclops at the CanAsian International Dance Festival in Toronto and restages it in Singapore with the full international cast.

The epic Ramayana is re-choreographed by Young Artiste Award recipient Meenakshy Bhaskar to a mix of fusion and traditional music and is presented at the launch of the Wellington Diwali Festival and the Diwali Festival of Lights Mela 2013 in Wellington, New Zealand.

A rich year of productions, starting with Santha Bhaskar’s collaboration with the Biological Arts Theatre’s Dr S Chandrasekaran, which results in Infinite Saree. With guest choreography by Canada-based Hari Krishnan, Purnima/Full Moon is presented. Under the invitation of S-VYASA, the Academy performs CHAKRA – the Philosophies of Vivekananda in Bangalore, India and under the invitation of the Thai government the Academy represents Singapore at the International Ramayana Festival in Bangkok, Thailand.

Bhed, a contrasting performance is brought to stage, featuring script and choreography by senior students of the Academy as well as dance styles such as Bollywood, Kollywood and Hiphop.

BAA hosts its first ever Kathakali Maha Mela, a Kathakali festival that runs through the night featuring BAA's very own Kalamandalam Biju alongside stalwarts from India.

The Core Dancers’ Programme is established to groom talented students.

Meenakshy Bhaskar, dancer and choreographer, is awarded the Young Artist Award for her contributions to Dance. Manohra, an original blend of Indian and Thai dance, music and costumes, premieres at the Singapore Festival of Arts, with Meenakshy playing the lead role of Manohra.

Ghanavenothan Retnam, resident flautist, musician and composer, is awarded the Young Artist Award for his contributions to Music while Nirmala Seshadri, student of Santha Bhaskar, is awarded the Young Artist Award for her contributions to Dance. Bhaskar’s Arts Academy represents Singapore at the Angkor International Ramayana Festival, performing Parinaamam at the majestic Angkor Wat in Cambodia. Meenakshy Bhaskar, who was cast in the lead role of Sita, is deemed the Best Dancer of the festival by the Straits Times, Singapore.

Bhaskar’s Arts Academy is registered as a non-profit company limited by guarantee with charity status and takes on the role of the performing wing of Nrityalaya. Parinaamam, a bold retelling of the Hindu epic Ramayana based on local poem “Sita’s Complaint”, premieres at the Festival of Asian Performing Arts.

With music composed by Dr Padma Subramaniam and featuring a multi-national orchestra, Nrityalaya collaborates with the Singapore Indian Fine Arts and Apsaras Arts to stage Ritu Mahatmyam for the Singapore Arts Festival. Later that year, Nrityalaya performs at the ASEAN Festival of Arts in Yogyakarta, Indonesia.

Santha Bhaskar’s Ardha Nareeswara is showcased at the 5th Singapore Festival of Dance.

The Bhaskar’s set up Nrityalaya Aesthetics Society, a teaching institution dedicated to bringing the arts to the masses. They offer a full flight of classes in music, dance and art.

Bhaskar’s Academy of Dance is invited to regularly perform at the Istana. Among the many dignitaries present was Queen Elizabeth II.

Meenakshy Bhaskar, their third child and only daughter is born.

Santha Bhaskar choreographs her first full-length dance drama Kutrala Kuravanji. The cast includes Chinese students who not only were students of Bhaskar’s Academy of Dance but also learnt dance from the Bhaskars in government schools.

Santha Bhaskar choreographs her first production Butterfly Lovers after being inspired by the film version of the Chinese folktale. She also conducts the first Bharatanatyam Arangetram in Singapore.

Bhaskar’s Academy of Dance expands its teaching and performance to Malaysia.

The Bhaskars welcome their first child, Ananda Mohan in India.

Mr Bhaskar travels to India and marries 16-year-old Pankyamma Santhamma. The newly married couple arrive in Singapore, where they continue performing and teaching together.

Mr KP Bhaskar transits in Singapore on his way to Australia, but serendipity keeps him in this multi-cultural island. Mr Bhaskar establishes himself as the first classical Indian dance teacher in what will be the Republic of Singapore. Bhaskar’s Academy of Dance is born.